Passengers of East Midlands train this afternoon were struck by a landslide caused by flooding, it is believed that an evacuation is underway however it is unclear whether there are any injuries from this unfortunate event. The incident happened near Corby, Northamptonshire at around 5:45pm this evening, on a train from Nottingham to London. A rescue train was called in, and there are still significant delays in the Nottingham to London line.

Many rail users are complaining of disruption associated with this event, customers are urged to check before travel to avoid disappointment, however reports now suggest that the situation is improving and customers in the affected train have been rescued.

More travel disruption has been reported, with the railway between Boston and Skegness currently flooded.

#EMTUpdate Buses continue to replace trains between Boston & Skegness today and also tomorrow. There is severe flooding of the railway near Thorpe Culvert so our train service has had to be suspended. More info can be found here: https://t.co/g5usOGhbS4 pic.twitter.com/wG2I7B75NB

In other weather news: Last night, after a 3 day June deluge, the river Steeping in Lincolnshire burst it’s banks. A section of a raised walkway, acting as a flood defense, was destroyed allowing water to flood out into nearby fields. The nearby village of Wainfleet fell victim to the floods, and water has unfortunately flooded many homes and businesses.

Lincolnshire has been the worst affected county in the UK from the flooding, although flood waters are also affecting parts of the Midlands – many flood warnings for specific rivers and areas remain in force from the Environment agency: 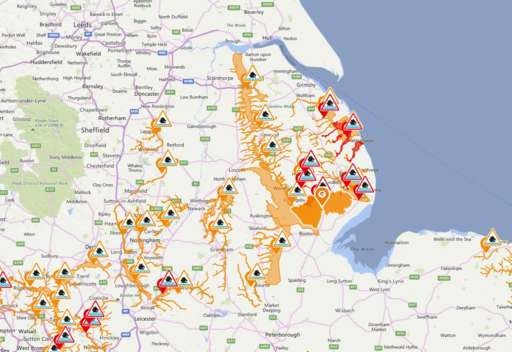 One saving grace is that there are no more met office weather warnings in force, meaning at the very least we can expect a respite from the bad weather, however there could still be further notable impacts in the worst affected areas, like Lincolnshire. By Tuesday the 18th of June we can expect some warmer weather.