For more information on the day to day changes in the snow-risk for various regions, please use our 5 day regional snow forecast.

You can also access the weather warnings for your region using our regional warning map:

Whilst much of the Mid West, Great Lakes region of the U.S. is about to be plunged into a record-breaking polar vortex winter freeze, the outlook is more modest here in the UK for the next few days with temperatures hovering at or perhaps slightly colder than average.

Although most inland areas will remain dry during tonight and into tomorrow with some ice forming in places, on the eastern coast of England we’ll keep some heavy showers, some of which may turn wintry overnight. This leads the way into a more settled Monday with a good deal of sunshine for inland areas, albeit rather cold. Winds will be lighter in comparison to today as well. Up in Western Scotland and Northern Ireland some wintry showers will form through Monday, giving accumulations of snow above 200 metres.

During Monday night wintry showers may sink into North West England, giving the Pennines a risk of a sprinkling. At the same time we continue to feed in showers to Western Scotland and Northern Ireland. Elsewhere, mainly dry and clear into Monday night with a frost in places.

Tuesday is when things get interesting. Most of us start the day cold and clear with a frost, though we’ll keep some scattered sleet and snow showers in the north west. Through the morning Ireland will be affected by outbreaks of rain, which may turn to snow later on Tuesday for central and northern parts of Ireland.

Through Tuesday we’ll keep that pattern of wintry showers in Western Scotland and Northern Ireland with the snow line falling closer to sea level, eastern Scotland dry. It’s through England and Wales where things could get interesting later on Tuesday, an area of precipitation associated with a low pressure system is expected to spin up into the British Isles on Tuesday, which is producing a risk of snow for inland areas. At the moment the risk is highest through the Midlands, especially the East Midlands, and into East Anglia by tea time Tuesday. However some more northern areas like Northern England, could also come into the risk zone. Later on Tuesday there’s a chance that more south eastern parts of England could be impacted by a little snow. 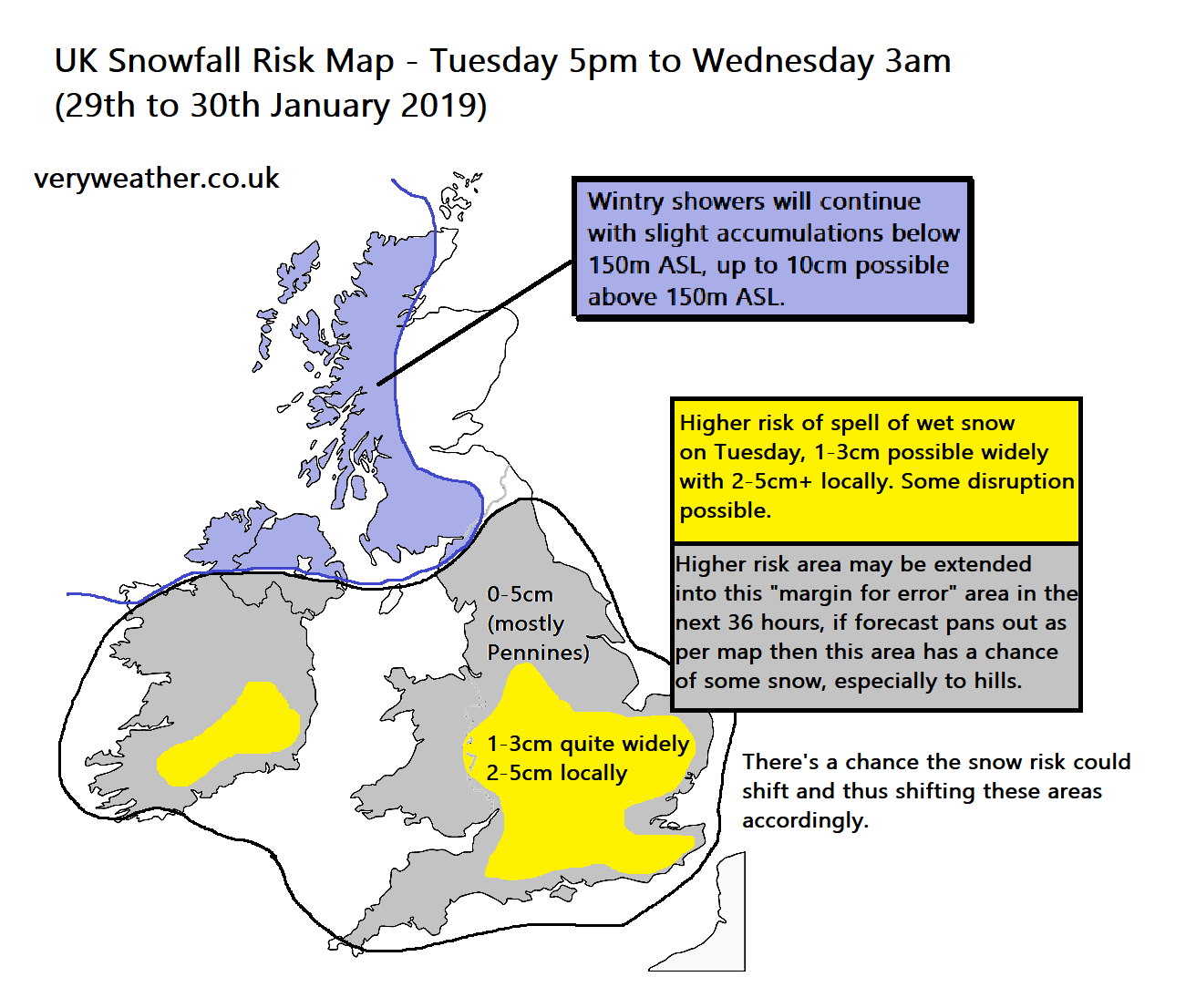 This is not expected to be a major snow event, and the “snow-zone” could shift, however we’ve outlined in our risk map the areas highest at risk of some snow on Tuesday evening. Once again this could change a little. We will update you tomorrow evening so make sure you check back on our page nearer the time to find out exactly where this snow will be, as in 24 hours we will have a good indication of where things will go.

Thereafter things could turn somewhat calmer into Wednesday, albeit a little colder with another widespread, in places hard frost to start Wednesday, with a risk of icy patches to start the day.

Another little low could spin up on Thursday evening, which could once again enhance the snow potential, this time perhaps for more central and northern areas, however details regarding this are quite uncertain.