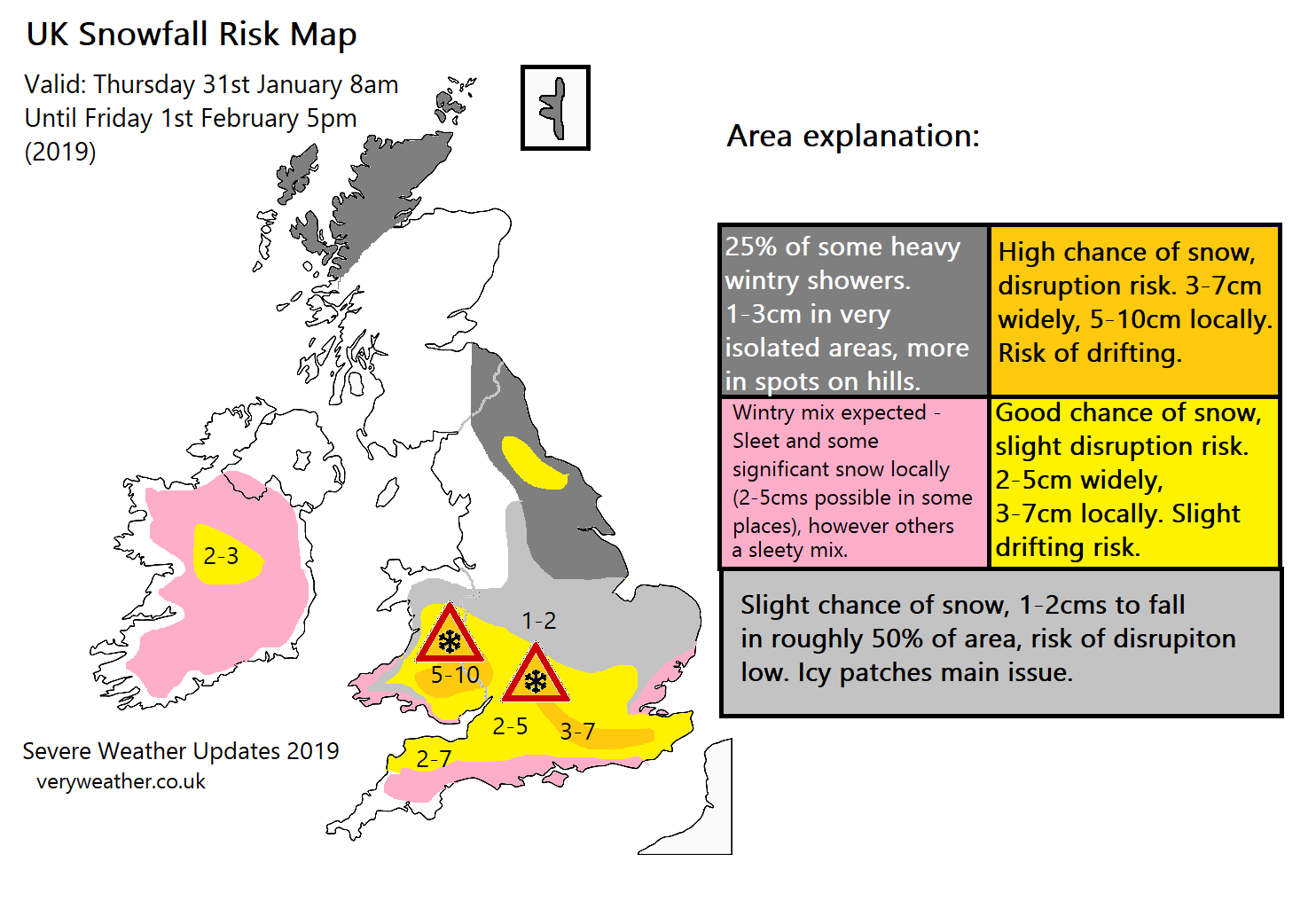 A dry day for most tomorrow with variable sunshine and cold conditions however in the south west of England a mixture of rain and hill snow will arrive during the afternoon. Some of this will fall as heavy snow over Dartmoor, Exmoor and high ground in the SW however some slight accumulations are possible to lower levels in Devon, Somerset and Wiltshire. A mixture of rain, sleet and snow will also affect central and southern Ireland with accumulations ripe on hills in the South through the afternoon.

By tea time it’s possible that snow could become quite heavy for the hills of southern Ireland, much of Wales (inland and up hills), and to lower levels for southern counties of England, firstly places like Wiltshire, Hampshire and Gloustershire, Herefordshire could be affected by 2-5cms with more in places by say tea time to 7pm before the snow transfers eastwards towards the home counties, into Greater London, and parts of the central and southern Midlands by say 10pm. Widely across the central and southern Midlands 1-3cm is possible with up to 5cm on hills. The most intense accumulations are likely on southern coastal counties of England (inland risk is higher), anywhere from Devon to Kent including Surrey, Northern Hampshire into Berkshire, Oxfordshire, Wiltshire, with 2-5cms likely widely here with up to 10cm in a few spots, perhaps 12 on hills. On the coast accumulations of snow will be patchy. For parts of Wales, by midnight Friday some areas could see 5-10cms on hills, with 2-7cms more typical in the Welsh Valleys.

Overnight into Friday snow will lose it’s intensity and become lighter but still affecting parts of the Midlands, perhaps parts of East Anglia, giving scattered accumulations of 0.5 to 2cm into Friday. However by Friday our focus shifts to North East England, South East Scotland for some isolated heavy snow showers, giving 2-10cm in places, these snow showers will be quite narrow in nature and isolated so predicting their exact location is almost impossible but they are likely in places in the North East on Friday, in a section from the North York Moors to the eastern Southern Uplands of Scotland they are possible.