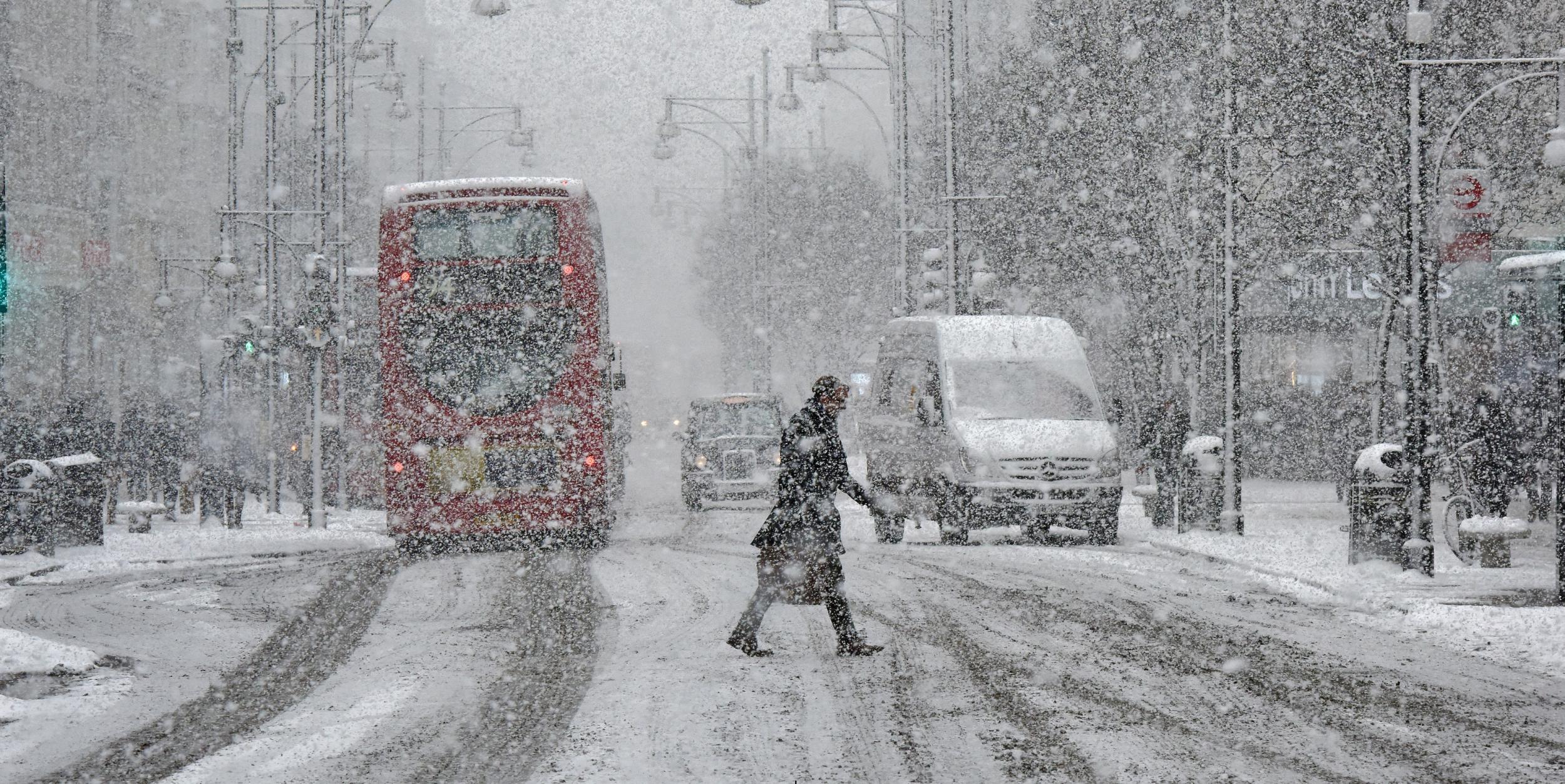 There’s no doubt that winters in the UK are becoming increasingly Atlantic driven. Causes for this can’t be absolutely narrowed down, however at a surface-level this is likely related to inflation of the Azores high and resultant more northerly track of the jet stream. This is perhaps down to human-induced climate change, and perhaps further affected by decadal oscillations in sea surface temperature. The result is a marked drop in the frequency of colder than average winters in the UK, as per the graph below. Note: if you would like to skip the factor analysis please scroll down to section 5 “climate change + summary” for a summary of the forecast. 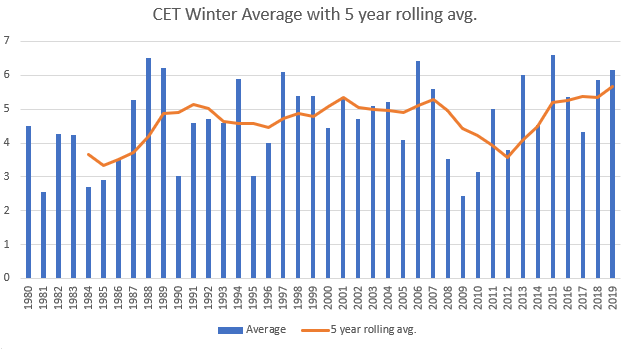 As atmospheric, and most severe weather events, follow a “normal distribution” in their frequency, there is still significant probabilities of cold weather events going forward. Granted, this may be 50% of what it was during 1980 to 1990, when the occurrence of a cold winter was 40% (4/10 for a decade), it now stands at roughly 15%. Using links between “factors” and likely NAO outcomes, it can still be suggested when occurrence of this 15% probabilistic risk is more or less likely. However, due to the chaotic nature of long term atmospheric processes, and the unique setting of the atmosphere during each season, a linear forecast model is very difficult to establish and this leads to great uncertainty.

This update therefore does not attempt to make a statistical or model based forecast for the winter of 2020. Instead, I will collectively analyze a few “factors” which are thought to be influential in the “production”, shall we say, of the UK atmospheric state during the winter period, which is used to inform a probability based forecast.

The atmospheric response following a certain pattern of North Atlantic sea surface temperatures known as the “tripole” is well established. Often a cold central North Atlantic (between Spain and NYC) with warmer temperatures to the south of Greenland and over the tropics are thought to character a “tripole” and is associated with a negative NAO. These cold surface temperatures can become “masked” over the summer only to re-emerge during December. The following chart, with depth placed on the left axis nicely shows this re-emergence into the winter of 2010. Notice how the surface based temperatures change but at depth the cold (-NAO signal) remains.

Through the Autumn of 2010, significant surface decay of the warm sea surface temperatures occurred over the central tripole belt. This can be seen nicely on NOAA Sea Surface temperature anomaly maps from May (left), August (centre) and December (right) on the image below. The challenge is now to work out whether re-emergence of cold is possible during 2020.

I must note, a broken but notable tripole was evident on the May 2020 SSTs in the Atlantic. This may suggest the presence of a -NAO “background signal” within the atmosphere at this stage. It has been significantly masked now thank to a warm Summer, however, whilst some cooling has occurred, it is a more widespread lowering of anomalies as opposed to concentrated cooling over the central North Atlantic area. This is therefore not re-emerging in a way which would strongly support redevelopment of a tripole pattern for Winter 2020. The emergence in 2010 was better aligned to the central Atlantic. So, confidence that the SSTs will redevelop into a tripole-“esque” pattern for Winter 2020 is low. Due to the earlier weak signals, may be that some tripole signal does exist, however it somewhat fragmented. Therefore this factor supports a near normal NAO for winter 2020. 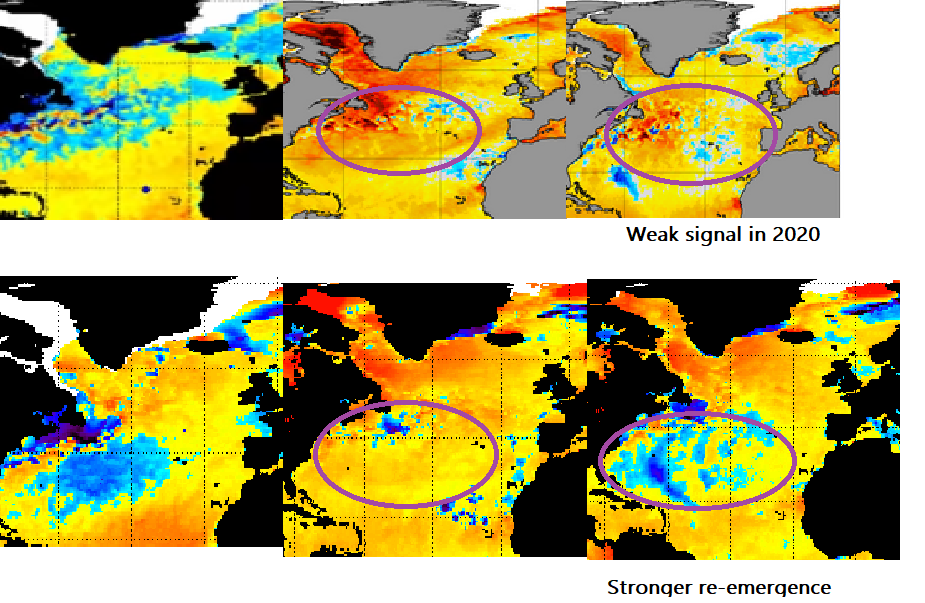 We are currently entering a moderate La Nina phase which is likely to peak this December. Using the C.E.T from the last 40 years as well as E.N.S.O 3 monthly means, it is found that ENSO only has a slight to insignificant influence on winter C.E.T. Nontheless, for La Nina winters the average C.E.T. ranges from 4.2 to 4.5 whereas for El Nino winters the average C.E.T. ranges from 4.8 to 5.1, with a lot of variability. The average winter C.E.T for winters which have ENSO values between 0.6 and 1.2C below normal is 3.8C, which is slightly below average. Interestingly, the temperature increased greatly towards strong La Nina events which have an average C.E.T of 5.2C. This suggests that weak to moderate La Nina events are more effective at modulating towards a negative NAO. Therefore this factor can be thought to help promote the production negative NAO feedbacks and is noted as significant for the winter 2020 forecast.

Moving away from the Earth’s surface now and concentrating on the magnetosphere and stratosphere. Solar activity has a significant influence on jet stream behavior, via a process known as down-welling which is the pressure-induced warming of lower layers of the atmosphere following a SSW. However, the significance of solar activity is not well understand which makes it difficult to use it confidently in a forecast. At present we are at a very low level of solar activity following 24-25 minimum. 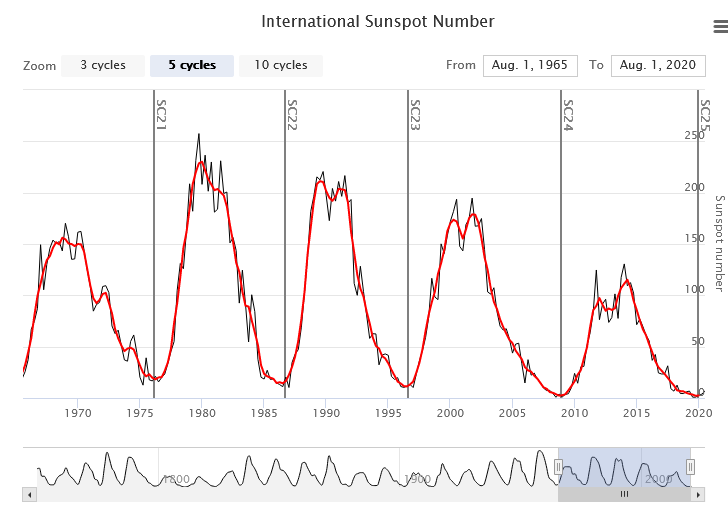 The QBO is not behaving as it should do and therefore there is little that can be discussed on this topic. It has been discussed by some that the strange QBO behavior is in association with expansion of the Azores high (mild signal), however I will leave this for later discussion.

Because the harsh winters of 2009 and 2010 occurred right around (2009) and just after (2010) solar cycle 23-24 minimum, I would like to explore the link between solar minimum and solar maximum using more recent data. This reason why the last 40 years is used is because it is thought to most accurately express the current dynamics. I have used solar cycles 21 to 24 for this. 3 periods which fit this category of “at” solar minimum (sunspot numbers <40) have been identified. The average winter C.E.T for all winters within this category is 4C and the total average is 4.6C. The average for winter periods at or just after solar minimum is 4.1C. The C.E.T average for winters with moderate or high solar activity is 5.2C.

Furthermore, for solar minimum winters characterized by a La Nina the winter C.E.T average was 3.5C which is significantly below the average, compared to solar minimum + El Nino which yields 4.3C. Interesting to note this winter is likely to have the La Nina + Solar Minimum combination which certainly holds well for an increased chance of a cold winter.

As per the first image and introduction it is clear that UK winter temperatures are increasing each decade with some inter-decadal variability (this is the climatology factor). As discussed, the chance of a colder than average winter for the upcoming decade for each winter is given at roughly 15%. This means that even with the presence of factors potentially juxtaposed towards a neutral or negative NAO, there will likely be a background climate change modulation of these factors towards a milder outcome. Nontheless, this winter certainly makes a bold statement via it’s La Nina + solar minimum combination and thus likely stands in the highest 30% class if ranking winters based on their factor juxtaposition towards a negative NAO. This means, using this methodology outlined, that the winter has around a 30% chance of being colder than average. However, due to uncertainties in the method and due to climate change a reduction of 10% seems apparent.

This means that the probability of a near normal winter temperature is probably at a greater chance (65%) with both a 20% chance of a cold & 15% chance of a milder than average winter. Note: this is slightly more juxtaposed towards the cold category compared to some recent years, except perhaps 2017/18. If I were to express these factors in a deterministic model I would suggest a variable, near temperature average winter with a mixture of Atlantic storms and snowfall events. This is for information purposes only and likely any other probabilistic forecast, it is not definite and occurrence of any of the 3 classes outlined is possible. 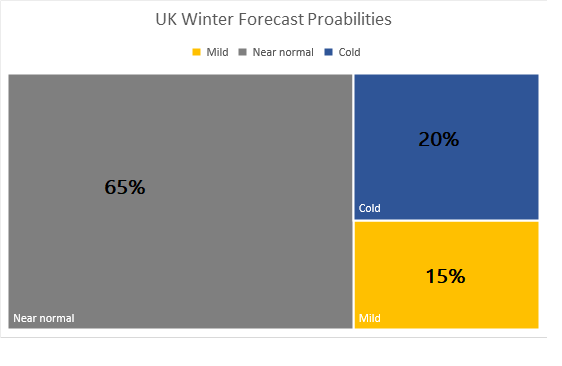 This may not have been the precision you desired. This is as explained due to uncertainty in long range weather forecasting, as well as the fact we are still at an early stage and re-emergence of the North Atlantic SSTs, as well as the October / November Pattern Index are not resolved yet. Therefore by November I can be a little more definitive about these outcomes and perhaps discuss precipitation in more detail.