You’ve been hearing it for a while (or maybe you haven’t) but it’s finally about to arrive. An unusually early winter storm / blizzard is gearing up to hit the upper North West of the country in the next day to three. What can be expected:

A) Very strong wind, and blizzard like (if not proper blizzard conditions – especially on high ground) and associated risks including power outages, and snow drifts blocking roads and isolating rural areas

B) High snowfall rates, travel disruption as a result. Especially given how early it is in the season (an element of “surprise” to the infrastructure).

C) Risk of structural damage due to high wind / ice in places. Strong winds, especially in Montana / Idaho and on high ground could produce some structural damage in places. Also a risk of flooding in areas to the east of the “snow line”, for example Eastern Montana and lower areas of Wyoming from 2 to 3 inches of rainfall in places.

The National Weather Service (weather.gov) have issued Winter Storm Warnings in these areas: 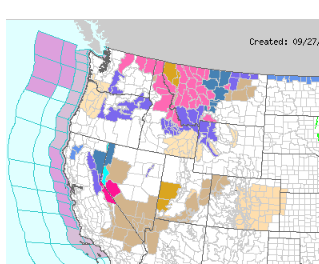 Snowfall is already falling across parts of South Western Canada and will extend in a general south easterly direction in the next 12 to 24 hours affecting parts of Oregon and Washington state (especially the East), and much of the northern Rockies mountain range, Idaho, north western Wyoming and central and western Montana. Largely 4-8 inches of snow is likely to fall in these areas.

To areas of lower elevation, a mixture of rain / sleet is possible. This could lead to development of ice.

By Sunday the snow is likely to become really quite heavy (or even very heavy) across western Montana and nearby areas such as northern Idaho, producing snowfall rates of up to 3 inches per hour locally. This means, some areas, especially on higher ground, could see 2 or potentially even 3 feet of snow, in the mountains of Montana. Great news for the Ski resorts of course! The chart below shows roughly how much snow can be expected from this system. Generally 3 to 8 inches (lighter blues and pinks) however some places could see all the way up to 20 inches+, granted this will be quite localized on hillier areas. The system will hopefully begin to dissipate later on Monday and into Tuesday but by this time will be affecting parts of central Canada with snowfall with more modest rates of 1 to 1.5 inches per hour. 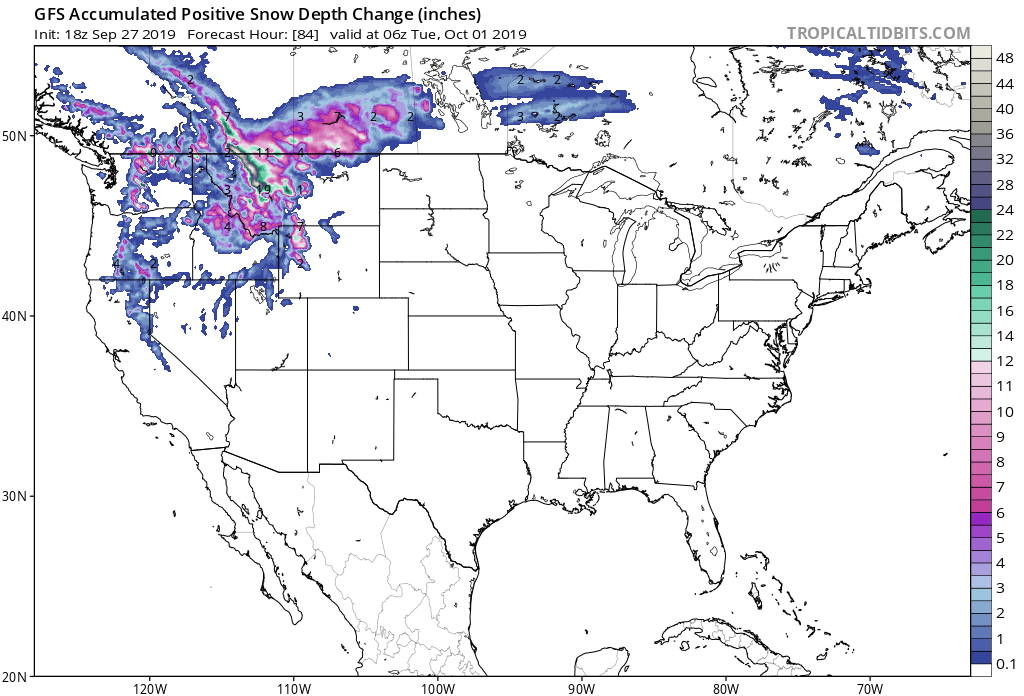