Thought the Montana blizzard that we’ve just encountered was rare? Well you’d be thinking correctly – however we may just be in for a repeat performance in the next week. Both the GFS (as you will see below) and the ECMWF (global forecasting models) are forecasting an injection of significantly colder than average air into parts of the North this coming week, especially focused around the more north western parts of the country from Wednesday on wards, however it could spread further east this time.

The key word here is “potential”, and that this is only a risk, however given that both the GFS and ECMWF seem keen on another sharp cold snap into the North West, we have to pay attention.

Take a look at the GFS predicted snowfall accumulations by Thursday evening (10th October) (via pivotalweather.com). 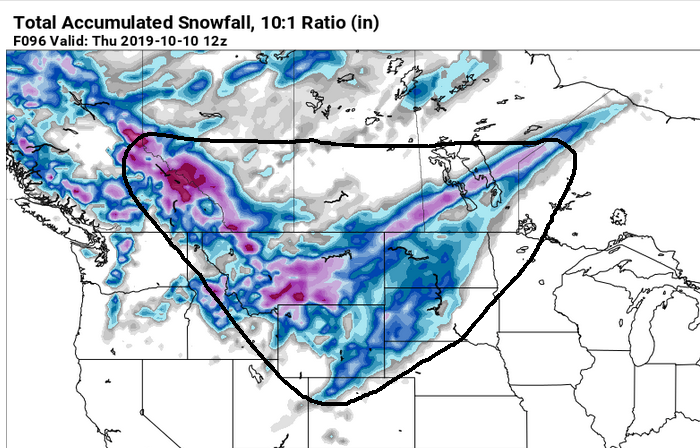 As you can see, it’s anticipating a large dumping of snow across many north western areas, and even into more “central northern” areas like North and South Dakota this coming week. It’s anticipating up to 12 inches of snow locally, on high ground of parts of Montana, however other states such as Wyoming and Idaho, the Dakotas as well as parts of Canada also look “at risk” of further early season snowfall, good news for the Ski Resorts of course.

As outlined there is a risk of snowfall, however to bring that risk there must also be cold temperatures (at this time of the year – below average) this map, also from Pivotalweather.com, shows temperature anomalies (compared to the average) for Thursday to. As you can see, an extensive area of blue is set to cover much of the North West, however could extend towards the Mid West (a lot of doubt about this) by the end of the week. 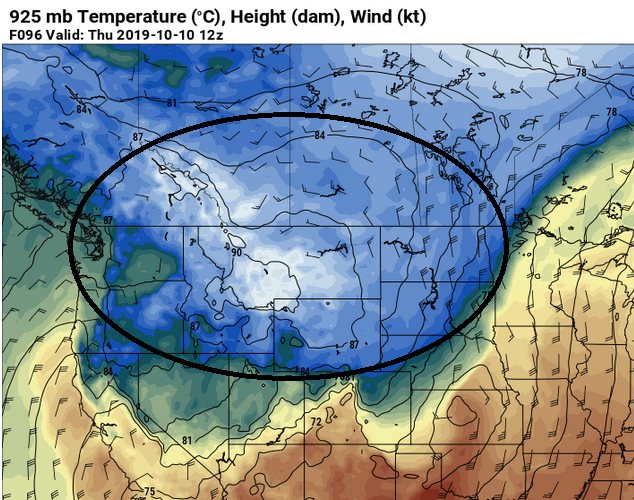 Of course, this is a few days out and it is subject to change, especially given how early we are in the season, however this is fairly unusual it has to be said.

Keep a very close eye on weather updates and forecasts in the coming few days. As mentioned, details remain uncertain and at the moment this is only a potential not a certainty, just a “heads-up”, if you like, of the potential for some wintry weather this coming week.