Yep, you guessed it, another strangely early winter storm. This one hot on it’s heels due to give Montana, North and South Dakota as well as parts of Minnesota a good dumping between now and the weekend. Take a look at TheWeatherChannel’s predicted snowfall accumulaiton map. Up to 2-3 feet for parts of North Dakota. That’s bound to cause some major travel issues this week. 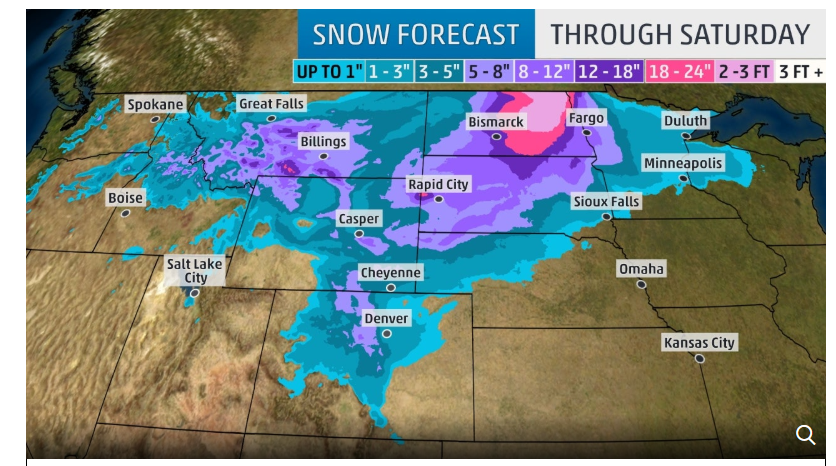 It’s not just North Dakota, take a look at Denver, seeing a couple inches, this storm will affect millions of people in the coming days. It’s currently 77F in Denver. And a high of 30F on Thursday with snow! The storm is due to hit the north west in the next 24 hours, slamming Montana, northern Idaho, and Wyoming with 4 to 8 inches of snowfall (especially on high ground). Winter Storm Warnings have been issued by the National Weather Service for a large part of Montana and Wyoming, and we expect these to trend eastwards into the Dakotas and potentially Minnesota (where winter storm watches are currently active) soon.

Ice: there may be a significant amount of ice in areas just south of the snow line. Especially on upland and rural areas. A freeze watch has been issued for parts of Colorado.

Strong winds: winds will be pretty strong with this storm. If you’re closer to the snow line, you can expect a wet snow and as a result less drifting. However those further north (Montana, North Dakota and Minnesota in particular) need to be on watch for severe drifting of snow, especially on high ground above 1000ft of elevation. This drifting snow could isolate rural areas and produce a risk of power outages especially in rural areas. The areas that experience drifting snow will also likely experience at least blizzard-like conditions with winds gusting between 30 and 40mph, producing not just snow but a severe windchill factor.