The Irish Met Office (Met Eireann) have recently named a vigorous area of low pressure expected to affect the British Isles on Monday as “Storm Brendan“. The system is large – and will deliver strong winds to virtually all parts of the UK and Ireland on Monday. Winds could reach 70 or 80mph in some exposed places, especially across coasts and hills. Inland, wind speeds of 50 to 60mph are more likely.

This is enough to produce some travel disruption during the day, and even some power outages / structural damages are possible in the worst affected areas.

As a result of the bad weather expected, the Met Office have issued yellow “be aware” wind warnings for parts of the UK. These are currently in force for many Irish Sea Coasts, for example: SW England, Wales, NW England, Western Scotland and Northern Ireland. Eastern Scotland is also under a yellow wind warning.

There’s a chance warnings could be upgraded to “Amber” prior to Monday and also be extended to include the rest of the country. Keep an eye on Met Office warnings for more information. 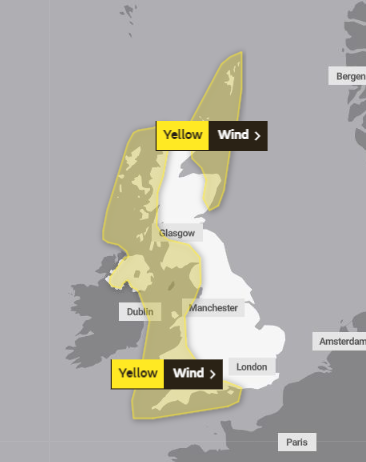 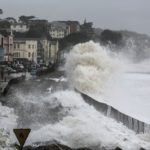 Heavy rain and strong winds will spread into western areas quite quickly on Monday morning, whilst most eastern areas will remain relatively calm at this stage. Very strong winds will continue in the west through the morning, in fact intensifying in some areas. Gusts of 60-70mph are likely in the west, for example around Irish sea coasts, through much of the day. Further east, for England and Wales, very strong winds are likely to develop later in the day. This probably leading to a difficult evening rush hour here with wind gusts close to 60mph with very heavy rain in many areas.

Whilst later in the day (evening) most western areas will see winds loosing severity somewhat, there’s the possibility of a secondary wave of very strong winds in Northern Ireland and western Scotland, with gusts perhaps over 80mph!. Heavy rain will also be an issue, especially on high ground in the west, with rainfall totals of 25mm possible on higher ground areas. So also watch out for some standing water and localized surface water flooding.

The rest of the week is also looking very unsettled, with a very active jet stream, as indicated by the map above, showing wind speeds at 18,000ft: the height of the jet stream. This means we can expect further periods of strong winds and heavy rain.