Things are hotting up next week. The hottest week of the year so far by a country mile, with a likelihood of temperatures hitting the 30’s Celsius for many of you.

⚠️The met office have issued a level 2 heat health alert, meaning that alert and readiness is needed. This has been issued from Tuesday – Thursday for south eastern Britain.⚠️ 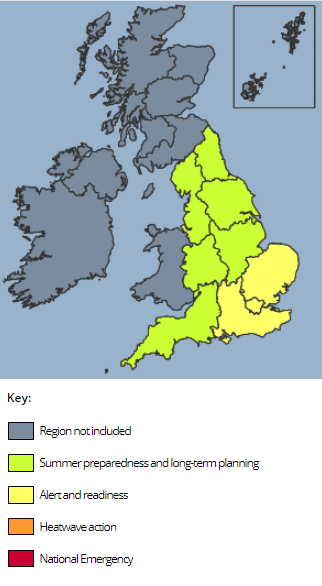 Just because the rest of the country is not affected, doesn’t mean it wont get hot. As we progress through next week, the heat health alert could be extended to other parts of the country.

Most likely maximum temperatures for next Thursday:

So, the forecast then, taking it step by step.

On Sunday most areas will enjoy some warm weather. 26C is possible in the South East. Later in the day there’s a growing risk of some thunderstorms in the west. By the evening and into the early hours of Monday, showers are likely to develop in the west and could become thundery and heavy for parts of Northern England and North Wales overnight into Monday. A localized risk of surface water flooding.

On Monday and Tuesday there is a further risk of thundery downpours, they could pop up just about anywhere. An increasingly muggy feel by this stage with temperatures into the high 20s for large parts of the country, however it will remain fresher in the far north, for Scotland and Northern Ireland.

We keep the hot, humid weather going through much of the week. There is a significant degree of uncertainty with regards to forecast details, like which days will be the hottest days. Computer models have been fluctuating between Thursday and Saturday, with each of those days having an equal potential of hitting 35C, and consequently probably breaking the all time UK June temperature record of 35.6C at risk!

There is also a growing risk of thundery downpours, again due to swings and roundabouts in computer model data, details are difficult to assatain. However the general picture is that thunderstorms are possible throughout the week, especially by the weekend, with much of the week looking hot and sunny. The heat may become dangerous, with temperatures climbing perhaps into the 30’s.