The UK Met Office have issued an AMBER weather-warning for Thunderstorms and the associated risk of flooding from heavy rain. The warning covers much of South East England, spanning central and eastern East Anglia, through Greater London and into Kent and down towards the South Coast. It is valid from 4pm until 9pm tonight. It also states there is a risk of thunderstorms, which means lightning is a possibility, as well as potentially hail and strong winds which could produce localised damage. 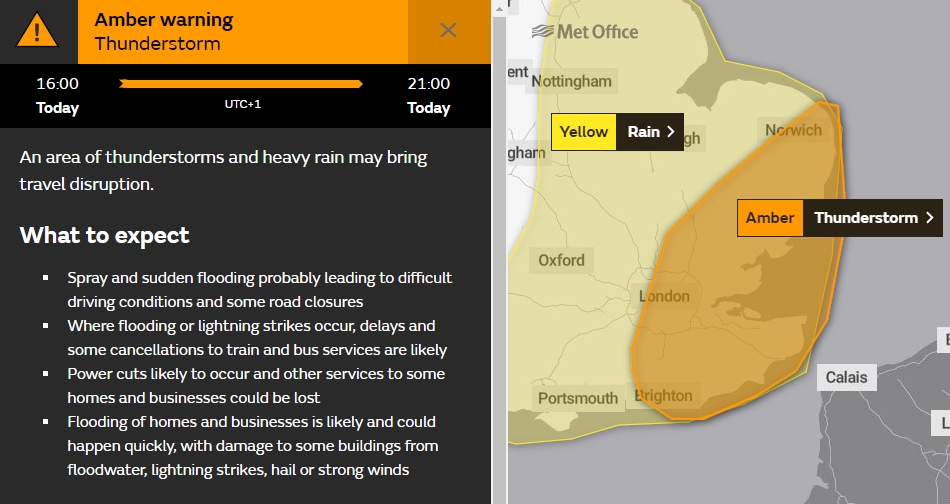 Some areas could see over a months worth of rain in just a few hours (perhaps up to 50mm in one or two places). Given that this coincides with rush-hour, there is a significant risk of travel disruption due to heavy downpours. Strong winds in the heaviest downpours also means there’s a risk of downed trees, especially given that many are still fully leaved.

On the rainfall radar (which shows the location and intensity of current rainfall), the rain is currently over the Channel and is likely to affect the south east by around 7pm this evening. 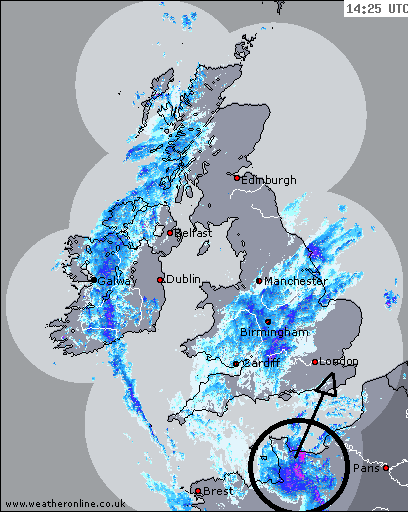 It’s not just the South East, other areas are also at risk, with much of the Midlands, as well as Southern and Eastern England under a yellow “be aware” rainfall warning for the same time, implying these downpours could be quite widespread, however the heaviest rainfall is likely to be in the south east.

As ever with thunderstorms, there is an element of uncertainty. They are by nature hit and miss, and sporadic, so some areas may see very little rainfall, whilst only a few miles down the road totals could reach record breaking levels, they are different to classic “weather fronts” that affect large areas and are easier to predict. Therefore, please be aware, if you’re planning on travelling within the warning areas this evening, of the risk of encountering some surface water flooding. Always remember, if it looks too deep to drive in, it probably is!