It may be very cold at present – but is there any snow on the way? 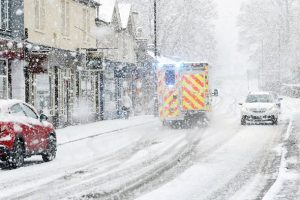 Unfortunately (or fortunately, depending on your view), there’s not likely to be any snowfall in the UK in the next week at least, however things look interesting later in December, more detail is given later in this post.

Of course, Severe Weather Updates 2019 will be the first to notify you if any snowfall does pop up in the forecast.

It’s absolutely freezing this morning though. The coldest temperatures are in Scotland, where -8C has been reached in Tulloch bridge as well as -8C at Glasgow airport. England has seen -3C and -4C in many locations. It’s a bit less cold in the far south west of the country. There are also some patches of dense freezing fog, one to bear in mind for this mornings travel.

The weekend will remain very cold. Temperatures are likely to remain in low single figures (0-4C) today. If you get the fog, temperatures could remain below freezing all day; but most areas will see some sunshine. There will be a bit of rain in the very far south west, but elsewhere it will be universally dry. Tonight will be another very cold one inland, but a bit more of a breeze in the south may prevent the development of freezing fog.

Temperatures are likely to gradually rise during next week, reaching double digits in the south by Thursday, but with it: wind and rain. It will be more unsettled in Scotland and Northern Ireland, where unsettled conditions will arrive earlier in the weekend, whereas the South will hold onto the settled, crispy winter conditions during both Monday and Tuesday of next week!

Most computer models are predicting that as we approach mid-month, we may see a return to something a bit colder again, with the possibility of wintry showers in northern areas, as well as overnight frosts. It’s too early to give indications about Christmas, however there are signs that temperatures could be a little colder than average.